“The spooks and specters are out and about this month, which means the holiday gaming season is almost upon us. With lots of big blockbuster titles recently released and many others great games set to launch in the coming weeks, there’s a lot to be excited about. But don’t forget about the tasty downloadable goodies awaiting you as well! This month’s downloadable games selection has us hunting for candy in crazy costumes, hopping through scores of comics, rhythmically blasting robots in space, and head-banging with some baddies.”

Ok, I’ve neglected to post each installment here over the past few months, but my monthly downloadable games column is still going strong over at What They Play. Check out the October installment here. 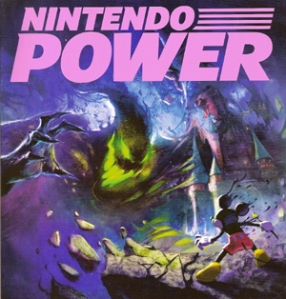 Whoo boy, I’ve been slacking on posts. The busy seasion is firing up again, so I’ve neglected to update ye old workblog as often as I’d like. I’ll remedy that promptly. The October issue of Nintendo Power features a short Community piece I wrote about Kimberly Young’s far out Metroid batik. For a first try, it’s pretty incredible, and this groove-inspired wall hanging definitely fits the college dorm  room decor vibe. That’s all I have in the October issue, but I should be ramping up my contributions in the near future.

Sadly, the November issue is the first in a long time that doesn’t have any Community pieces I’ve written in it, but I have more in the pipeline for future issues. Freelance comrade Andrew Hayward holds down the fort nicely with a write-up of some Nintendo-themed custom vinyl toys and a halloween themed piece. You can, however, find my review of Lufia: Curse of the Sinistrals over on pg. 90. I was pleasantly surprised by that one, and I recommend it for action-RPG fans. I should have three different items appearing in the December 2010 issue, so stay tuned.

I love that the cover of the Oct. issue of PlayStation: The Official Magazine boasts in tiny, barely readable text: “Now with 100% more Yoda!” Indeed, Yoda does make quite an appearance in the issue, as do I. In my PSN Games review column this month I tackle Death Track: Resurrection, The Price Is Right, Planet Minigolf, Voodoo Dice, and Catan, among various add-ons and PSOne titles. Stay tuned, as I have some good stuff going in the next issue. 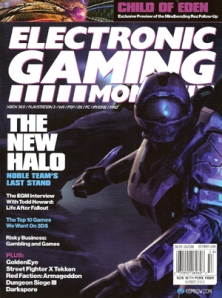 I decided to hit up the local mart the other day for a Long Trail Double Bag and ended up finding this as well. I’ve been doing some writing for EGM/EGMi for a few months now, but this is the first time I’ve had anything run in the print edition. The Oct. 2010 issue features two contributions. After an exciting last-minute green light deadline scramble, I put together a short news/feature piece on The Indie Fund that I’m quite happy with. Big thanks to the awesome indie devs behind the project for whipping up some good quotes and info on such short notice. That article appears on Pag 17.  On Page 76 you’ll find my review of Limbo that ran in a previous digital edition of EGMi.

I just wrapped up a few pieces for EGMi and the next print edition, including a lengthy feature article and some reviews.  I’ll post more about that once it’s out, as there’s some cool stuff to chat about there.  Cheers!

Things will be changing up a bit starting out in the Nov. Issue, but I’ll still be contributing to the monthly PSN coverage and other areas of PTOM beyond that point. In the meantime, peep my two-page PSN review spread on pages 90 and 91. This month I tackle the excellent Lead and Gold: Gangs of the Wild West, Rocket Knight, Tecmo Bowl Throwback, Super Stacker, and Soldner-X2: Final Prototype among others. I also have a full page review of Joe Danger on page 82 that’s worth checking out. In case you’re not in the know: get it…immediately. Great game. That is all!