Missile Cards is out NOW on Steam at 10% off this week! Only $4.49 for a few more days – If you want to support my ongoing gamedev efforts this year, grabbing a copy this critical launch week means a lot! Thanks! 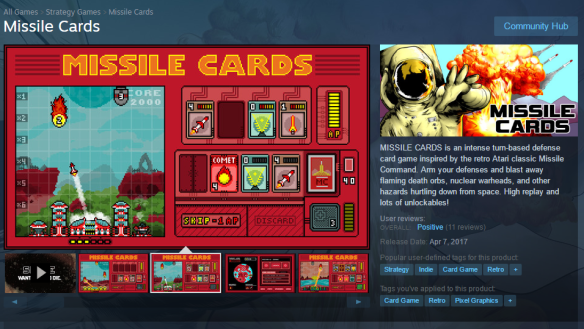 It’s t-shirt weather in Vermont at the moment, and the cool breeze wafting in through the window offers a much needed reminder this morning that, yes, there is a living, breathing world outside of this dark, narrow launch tunnel. It’s been a hell of a few days for various reasons, but now that I’ve caught my breath again, it’s time for a quick Steam launch update.

Sales haven’t really taken off, but they’re plugging along slow and steady. In four days, Missile Cards cards has sold a mere 130 copies. That’s definitely not the launch weekend I had hoped for, but it’s not awful. At this rate, with very minimal press and only a small bit of YouTube/Streamer coverage, I’m averaging about 32 sales of Missile Cards a day.

This month I’m mulling over some important questions. Namely: what’s next? I’m not done with Missile Cards launch hustle, and part of this experiment requires me to keep on keeping on with it until I hit the 1-month goal. I’m really curious to see if I’ll hit the 5,000 sales target — which is still admittedly just a drop in the bucket compared to a decently successful indie launch, yet far more than a lot of small games make.

Personally, I can’t (though I will) keep pushing myself the way I have been for the last three years much longer. Working full time, while making multiple solo games and running an indie studio all-the-while is too much for me to juggle. Unfortunately, only the first of those three things is financially viable for paying the bills long-term right now.

I’m working on other projects, many of which I’m REALLY excited for and can’t wait to share. But I can’t help but feeling demotivated. Free time is something I have precious little of these days, and I’ve been spending ALL of it working around the clock to make more things.

Part of that is because I love creating stuff, but a bigger part of that (at least recently) is that I’m pushing 4,000% to hit the next level: being able to earn enough to actually scale back my freelancing to more part time, and spend more “work hour” time on actual games — without losing massive chunks of income and stressing myself out in the process.

Every time I pour 400% of myself into a new game project, and it fails to gain traction despite my best efforts, it makes me wonder: why am I killing myself to do this? Why can’t I stop? It’s exciting to see other small developers find big successes with their unusual projects. They’ve put in the hard time to make that happen, and often have a trail of unsuccessful projects in their wake leading up to “the big one.”

I’ve never had anything I’ve worked on become an insta-hit (be it a book, an online course, a game or whatever). I have had plenty of small successes, but each one has required me to scrape and claw my way to hit that nebulous threshold. I’d be lying if I’m not occasionally bitter when I see other folks who dive into games and hit a home run with their first project and it frees them up to work on games for years to come without worry of income.

That’s a rarity, of course. And y’know…good for them. That’s awesome to be able to do that. Sometimes it just sucks that everything I do always requires an epic ton of hustle and stress and suffering just to get the smallest bit of success. I’m concerned that if and when I finally hit that mark with my own work, it’ll be too late: I’ll be too mentally/physically damaged from sacrificing and punishing myself without reprieve to be able to enjoy that moment in the sun.

Again, though. I’m not alone. This is the reality for a lot of indies. The only difference is that rather than giving up, I’m going to keep throwing myself at the wall until either it breaks…or I do. That’s just the way I’m wired.

But anyhoo. On to cheerier things:

I have a long ways to go to hit my “break even” target of 5,000 copies by the end of the month. There’s no way of telling right now if that’s even remotely realistic of a goal. I went into this knowing that it might not be, but anything can happen in the coming weeks. Right now, I have to turn my time and attention back to freelance work grind to stay afloat, though I’m not giving up. A big thanks to everyone who has picked up the game or shared it on social media.

Most encouraging, I think, are the Steam user reviews, which have been overwhelmingly positive so far. It’s really awesome to see that people are having fun with the game, and people genuinely seem to be enjoying it. That means a lot to me. Time to hit some work deadlines, but I’ll be back here with more updates and thoughts on the launch soon. In the meantime, I appreciate any help you can muster!

Thanks so much! I’ll be blogging about the game and my progress on the “Quest to 5,000” throughout the month at www.nathanmeunier.com.