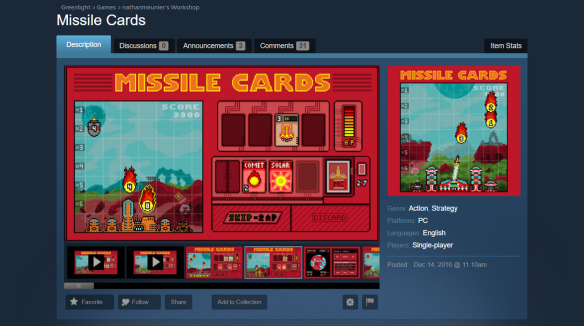 Steam Greenlight is a fickle, flawed, fanged, gnarly beast most indie developers inevitably have to do battle with in order to get their games on Steam.

And let’s be honest…if you’re making a PC game and it’s NOT on Steam, your chances of getting enough sales to make its development worthwhile are pretty…nil.

A swift and decisive victory is always ideal, but there are many times when games become entangled in the process and stagnate in its serpentine grasp, the life squeezing from them with every passing moment,.

This is the situation I find myself in today.

My latest small game, Missile Cards, is currently wrapped up in the barbed, tentacled limbs of this unruly creature that is Steam Greenlight, and I could use your help hacking it free.

Let your YES votes be your sword, and let’s cut until there’s nothing left in our path!

Still not convinced Missile Cards deserve to be on Steam? Hmmm.

WHY NOT TRY THE DEMO?

To my lovely Beta testers who signed on last month: you have not been forsaken. I’m prepping a meaty private Beta build for testing very shortly. In the meantime, however, I’ve released a small public demo of Missile Cards on itch.io to let people kick the tires.

I’ve already gotten a few Let’s Plays and some great feedback, which has helped me tune and improve the game.

Please feel free to try the Demo today, and don’t forget to vote on Steam!

It’s only the first base, but it has a good 30-40 minutes of playtime in it, and it gives a good sense of what the initial gameplay is like.

Still not sure why it’s so important to vote NOW rather than just wait to see if the game get’s through? How about….

A PEEK BEHIND THE SCENES OF STEAM GREENLIGHT

The vast majority of Steam Greenlight votes happen in the first two days, when your game is featured in the “New Games” feed section of Greenlight.

Beyond that point? It drops off to crickets. That’s when it’s up to developers to hustle for votes, and if you don’t get enough votes to crack the top 100 games (which constantly shifts), you can forget about getting your game on Steam anytime soon.

Missile Cards development is progressing rapidly, and the game is really shaping up!

But my hands are tied until I pass Greenlight. As you can see from the graph below…I have quite a many more votes to go. A few hundred at least, if not significantly more.

I’m now averaging roughly one Yes vote every other day, despite ongoing efforts to create content, write articles relating to the game, and push to get the word out daily.

This feels a lot like laboriously squeezing a dozen oranges for one drop of succulent juice.

This is not as dire as it seems, but it definitely frustrating from a developer standpoint. I know that, once I can release the game on Steam, it’ll find enough of a niche audience to succeed (I’m keeping the game intentionally small scoped and highly replayable to minimize risk and keep dev time succinct).

Missile Cards is a small project I embarked on over the holidays as a brief palette cleaner from my bigger, darker, more horrific projects I’m working on. It’s not meant to be a huge, massive, long-term thing. But it’s a lot of fun to play and has a lot of replay woven throughout its fabric.

…the sooner I can get back to making games about things that cloak themselves in the warmth of people’s entrails and whisper your secret name from the darkness outside your window.

Anyhow. Cheers! I appreciate your YES votes and your help!