It’s been about two months and a week since I launched Write Short Kindle Books, which became a Kindle bestseller and has easily been my most successful book yet. I previously posted an extensive rundown of how my initial launch month went, but I figured it’d be useful to check-in with an update on how things have gone past the prime 30-day launch window.

Overall, things are starting to slow down a bit, but I’m really pleased with how it’s all going. I’m also nowhere near finished with promo plans and other ideas to keep the book out there and in the charts. Anyhow, let’s get to it!

A quick update, by the numbers

A few thoughts and notes on WSKB’s success

Hitting #1 in several categories early-on in my launch cycle definitely had a big impact in my overall sales and visibility on the Amazon Bestseller charts in several key niche categories, but I think holding the #1 slot in a few categories steadily for over a month, then continuing to stay in the top 1-4 top selling books in my respective categories REALLY helped keep sales rolling steady.

On most days I’ve sold at least 20+ copies of WSKB and had a fluctuating number of KU downloads daily. Some days have seen sales hit the high 60-to-80 mark, but in general, it’s been around 20-30 copies daily.

I was holding my breath around the month mark to see if being booted from the “Hot New Releases” tab (which happens after a book has been out a month and no longer “new”) would negatively impact sales. It didn’t, but probably because I was still in the #1 slot.

I’ve continued to hustle and promote the book daily, posting in relevant Facebook groups and other social media, and doing what I can to create interesting content around the book as time allows between a busy freelance schedule and other book projects. 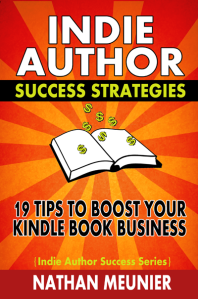 WSKB sales have begun to slow down in March, but I’m not surprised. They’ve held pretty steady, even after I bumped the price up to its more normal range at $2.99. I’ll probably run a $0.99 promo in the not-too-distant future to jump-start momentum if it lags too much.

Over the past week or so, I’ve been getting between 10-20 sales a day or less, though I’ve also shifted gears to promote the recent launch of Book 2 in the series, Indie Author Success Strategies: 19 Tips to Boost Your Kindle Book Business.

That’s been interesting, too. The cover is brighter and bolder, and it’s a book that’s packed with actionable insights that build on and go beyond the strong foundation for the series I laid down in WSKB, but it’s not gaining the same traction. At least not yet.

This intrigues me, as it could be any number of things that might be the cause. I will note, however, that in its first week, WSKB only averaged about 10 sales a day, then rapidly spiked upwards in week two and continued to climb each week for the first month. I’m hoping a similar thing happens with Book 2, but who knows, right?

Maybe the title and subtitle aren’t as keyword rich? Maybe something I did different with my launch promo efforts hampered its momentum. Maybe folks just aren’t as interested in the topic and/or content, though I feel it’s a strong book that definitely delivers a lot of value for its current $0.99 launch price. Maybe some people are turned off by the term “indie author” in the title? Or maybe it’s none of the above and I just need to keep at it and give it more time to build?

It’s gotten some very positive reviews so far, and it is ranking on the charts in the top 100 books in both its categories at least, so there’s that.

I’m not really sweating it, but I am eager to get more momentum rolling for Book 2 while it’s still new enough to benefit from the traction I’d get from venturing into the top 3 territory in my categories. If you want to check it out, I’d appreciate it.

I’ve been taking extensive notes on both book launches, and I plan to keep reporting back throughout the process! It’s been an exciting run with this new series, and I’m only just getting started.

Book 3, which is well underway, will be both a Kindle book and an expanded Udemy course on Podcasting for Authors. I’ve already interviewed Joanna Penn, Bryan Cohen, and some other great folks to add additional insight and killer content for the book and course, and I have a growing list of excellent author-podcaster folks I’ll be touching base with and interviewing soon. In the meantime, you can also check out my own podcast, The Freelance Game, which just fired up its second season!

Thanks for reading! Hope my word-nerd ramblings were interesting or useful!

Give your Kindle books a MEGA BOOST and self-publish the smart way!

Does it feel like you’re pouring your time, energy, and passion into your books, only to spin your tires with mediocre sales and minimal reader reviews? Don’t give up!

Building on the self-publishing manifesto laid down in Write Short Kindle Books, this second book in the Indie Author Success Series delivers 19 core success strategies (and 70+ action tips) that will help you re-think your approach, write better (and better targeted) books, get more reviews, avoid wasting your time and money, build and expand your platform, and empower you to push upwards to achieve your goals of becoming a bestselling author.