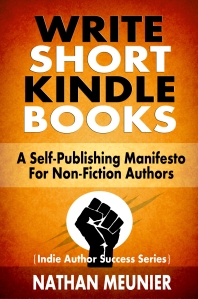 About a month ago, I launched my latest book — a self-publishing manifesto called Write Short Kindle Books — into the world (i.e. onto the Kindle marketplace). I spent a lot of time battleplanning this book launch, my fifth one to date, in hopes that trying something new would reach a broader market of readers and push this book higher than any of my previous books had reached both visibility and sales-wise. Except about three days into the launch I hit a wrong switch and borked the timing of the free to paid transition. Or so I thought. I never imagined things would turn around in such a big way in the weeks to come.

Here’s a by-the-numbers breakdown of the first month of sales along with a few observations and notes on what happened along the way.

The setup: I soft-launched Write Short Kindle Books for FREE on about Jan 9th, promoting it heavily to my mailing list, a selection of “free book” Facebook groups, social media, and a couple of promo sites. A few days later, I switched to $0.99.

I paid zero dollars for advertising. I also paid zero dollars on production too, as I did all of the layout, formatting, cover design, marketing, and other misc tasks myself. I don’t normally recommend that, but I feel pretty comfortable with my abilities on that front. It’s definitely worth going super DIY to save money, if you’ve got experience doing the nitty-gritty.

This time around, I elected to crowd-source the editing through a small team of my awesome regular beta readers, then double down and polish it further. [Thanks again, BTW, to my awesome beta readers who helped out. You are indeed awesome!]

So the only real expense for the entire project was my time to write, rewrite, re-rewrite, and heavily edit the hell out of the book, then promote it. True, that took a lot of legwork on my part, but when you consider that I’m earning a profit from the very first sale and don’t have to earn back hundreds or thousands of dollars in production expenses, I consider that a win. With that in mind, here’s the breakdown after 1 month.

Here’s what that looks like in purdy chart format (current as of 10AM EST…and continuing to grow).

A few notes on pricing:

After switching from free to paid a couple of days after launch, I kept the book at $0.99 for about two and a half weeks (which only earned me about $0.30 ish per sale but definitely helped boost my sales numbers initially). I switched to $2.99 after that point, earning a higher 70 percent royalty, and that made a huge positive impact on actual income earned from the book. I probably made the bulk of my income from sales in the last week or so.

I’ve had a decent number of Kindle Unlimited downloads throughout launch too, and while those earn me less of a royalty than sales at the $2.99 price, they earn more than I’d get at the $0.99 price point, so I feel ok about that.

I’ll save the detailed rundown of launch strategies and things I did to market the book for another post.

Pros! — Aka what went well.

Cons! — Aka things that could have gone better.

So that’s how my month went in a nutshell! I’m really happy with the way things turned out, and it’s easily my most successful launch to date. Sales seem strong, and people appear to be digging the book [for the most part]. To put things in perspective, I’ve sold roughly 1,500 copies of my very first book, Up Up Down Down Left WRITE, but that was over the course of a year and a half. In contrast? Write Short Kindle Books moved 1,345 paid units in a single month. That’s crazy awesome.

I’ve learned a lot from this launch, and the experiments I tinkered with behind-the-scenes, so I’ll be reporting more as I go! You won’t have to wait very long for the next book in the series either! I’ve got Book 2 nearly finished, and I hope to launch that in the next month or so. Interviews for Book 3, which is a slightly meatier special project, are underway and going well! It’s an exciting year so far and I have a crazy few months ahead.

If you haven’t yet, I’d love it if you’d check out Write Short Kindle Books: A Self-Publishing Manifesto for Non-Fiction Authors, and don’t forget to leave a quick review and rating if you enjoyed the book [thanks]! Also, you can sign-up to my new Indie Author Success Book Mailing List to receive future books for FREE at launch and hear about other related projects in the works.

6 thoughts on “A Successful Book Launch — By The Numbers”