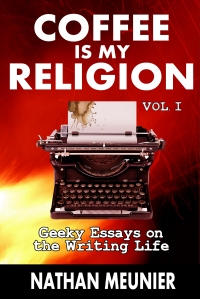 Oh hey, it’s been a while! Keeping this update shortish, but I wanted to let folks know that I have a few new books coming out in the near future. This year I wrote manuscripts for about 4-5 book projects —  except I never launched them. At least I haven’t yet. I’ve been sitting on those manuscripts while trying out a new venture (indie game development) and getting a new-ish freelance routine sorted out. It’s been a crazy summer (and now fall) full of challenges, troubleshooting, cautious optimism, and then more challenges.

Long story short, I’m awash in assorted creative projects that aren’t really making ends meet at the moment financially, and I’m working to rebuild a freelance routine that temporarily faltered, then collapsed when I decided to test out game development as a side project (being a games-centric freelancer is at the polar opposite end of the spectrum career-wise from game development. The two don’t go together well, for mostly obvious reasons).

With things feeling pretty dreary at the moment (hell, if I’m being honest, they’ve been dreary for a few months straight now) and a lot of elements beyond my direct control, it seemed a good time to unearth these dormant book projects, polish them up, and prep them for launch.

If you’re a fan of my Game Journo Guides book series, I’ll apologize up front by saying that none of the next few books I’m about to release are specifically connected to that series. The silver lining in this, for those of you among my limited readership that still have an interest in what I’m doing on this front, is that all three of my upcoming books are very much connected to writing, freelancing, and related word-slinging subjects.

The first book is related directly to self-publishing, and it’s a part manifesto, part how-to guide that’s geared towards writers looking to find an easier way to get books out into the world. This should also be of interest to some of my game journo colleagues, I hope, as it (in-part) details how to take long-form article ideas and spin them into book projects.

The second book relates directly to freelancing. More specifically, it’s a book about niche freelancing and finding a way to sling words for money while writing about subjects you find most near and dear to your own personal interests and hobbies.

The third book is the first volume in what I hope will be an ongoing series of personal essay books relating to writing, publishing, freelancing, and other similar creative endeavors. Out of the three projects currently on deck, that book, Coffee Is My Religion, is probably the most directly tied to game industry freelancing. It’s pretty personal, revolving very specifically about various facets of my own writing world. It’s a book of stories detailing challenges, victories, nerdiness, humor, coffee obsession, and…cats. So many cats. Yeah.

No clue which’ll come first or how quickly they’ll all be launched, but expect at least one of them to drop before the New Year, with the others coming soon after. More details soon!