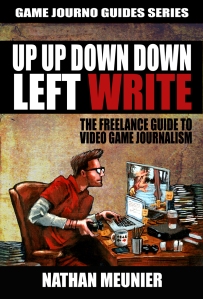 …
You might have noticed it’s been a little quiet around these parts lately. That’s because I’ve been hard at work wrapping up my second (and third books) over the holiday months! With the launch of UUDDLW in 2013 wrapping up a wild and diverse year, I’m excited to forge ahead into 2014 with a lot of new book projects in the works. I may have mentioned it here and there in passing to a few people, but I wanted to take a moment to formally announce the new Game Journo Guides Series, talk about my new book Interview Fu coming out later this month, and give a quick update on other bookish things coming down the pike from me this year!

Before I talk about all the exciting stuff coming up next, I wanted to briefly recap on how things are going with my first book, Up Up Down Down Left WRITE: The Freelance Guide To Video Game Journalism. Between the original Kickstarter and ongoing sale of the print and Kindle editions (launched in August 2013), I’ve sold about 1,050 copies so far! That’s super awesome! The book is still going strong sales-wise, albeit at a more slow and steady pace now, and I expect the launch of my upcoming books will help boost that in the coming months. Feels good. Really. Thanks a bunch for the support!

The great feedback I’ve been getting from readers is even more encouraging. I’ve received emails and Twitter messages from folks who’ve been putting the advice in the book to the test and have used it to score their first paying freelance gigs in the gaming industry — at publications like GameSpot, IGN, Polygon, Kotaku, and more! That’s great to hear!

This is only the beginning. [Cue ominous thunderclap].

As you can tell from the image above, the Kindle edition of UUDDLW is sporting a sexy new cover design! Woo! That’s because it’s now the cornerstone for an ongoing book series I’m working on that tackles different key facets of writing in the game industry.

I covered a lot of ground in UUDDLW, which makes it the perfect starting point for writers looking to break into the industry, but the Game Journo Guides Series will build out on that foundation in some exciting ways. While the series is penned with game and geek culture-centric writers in mind, the advice in each book is laid out in a way that will be useful to writers of all stripes.

Next up is Interview Fu: The Game Journo Guide To Conducting Killer Interviews — a guide that digs deep into the fine art of interviewing, a crucial skill any writer should seek to master whether they’re covering games or other beats. That’s in production now and will be launching later this month! Hells yeah!

I’ve also just completed a final draft of the third book in the series: Freelance Writing Hacks: 55 Tips For Word Mercenary Success, which will be a short and punchy Kindle-only release planned for a spring launch.

Beyond that, I’m already diving into writing and blocking out the next few books in the series. Stay tuned! If you have feedback on specific areas you’d like me to dig into or topics you want to read about, by all means don’t hesitate to get in touch. I’m always open to suggestions from readers.

You want details? I got details! Interview Fu: The Game Journo Guide to Conducting Killer Interviews will be launching towards the end of January on Kindle and in Print. It’s a shorter, very focused book (roughly 30,000+ words) that’s jam-packed with advice covering the full spectrum of the interviewing process: from how to identify sources and line-up interviews to making sure they go smoothly and troubleshooting along the way and more!

In addition to useful advice and insider tips to boost your interviewing chops, this book is also loaded with personal anecdotes and troubleshooting stories from my past experience working both as a traditional news reporter and a game journalist over the past decade.

Even better: it contains two MASSIVE bonus chapters featuring interviews and insights from other pros on both side of the fence. I interviewed writer and editor vets like Dan Amrich, Matt Leone, Kat Bailey, and Patrick Klepek to get their take on the interviewing process (how meta, I know). They had some really great stuff to share! On the game developer side, I also spoke to some amazing folks who’ve been in both the AAA and indie game scene for years, including Randy Smith (Tiger Style), Robin Hunicke (Funomena), Phil Tibitoski (Young Horses), and Greg Kasavin (Supergiant Games).

That’s why the book is launching a few months later than originally planned, but TRUST ME: that extra material is well worth the wait.

So yeah! Buckle up. It’s going to be an exciting year!